Whether you’re an adult or a child, you will most definitely love ATOMS. What are they? They represent a system of logic blocks, motors and sensors that can help you create wonderful things. They are not just simple blocks, but they can also do various things, which is pretty impressive. What’s even more amazing is that ATOMS can work with the toys your children already uses including action figures, LEGOs and even Barbies and stuffed animals. You don’t need any programming or electronics experience to use ATOMS. Moreover, they can be used by the kids themselves, as their components are not harmful. It takes only 5 minutes to build something interesting with the ATOMS.

The team that created the ATOMS comes with some introductory sets that your kids can use and play with. First of all, there is the Monster Construction Set. You may have lots of monsters, dragons and other creatures that just lay there and do nothing. Well, the ATOMS can allow you not only to construct the monster, but also to personalize it. So, depending on what you want, you can make your creature love light and run faster or hide under the bed when it’s dark.

The next kit is the Magic Wand Set. There are numerous magic wands that do nothing. Then why are they magic? The ATOMS help you build a magic wand that really knows how to do tricks: moving toys, turning on the light or even closing doors. There is also an exploding brick in the set that can make you blow up your brother’s LEGO house.

Finally, there is the iOS Control Set for slighter older kids. As the name says, this kit helps you control your ATOMS toys with an iPod, iPad or iPhone that features Bluetooth 4.0. 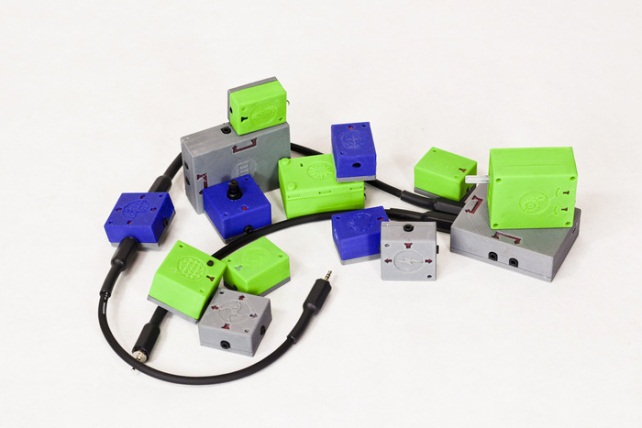 Depending on the model, the ATOMS can include: light sensor, motor, iOS control brick, sound module, exploding brick, knob module, accelerometer, battery brick, Flip Flop, splitter, LED, IR target and IR laser. All these modules will help you do all the crazy things mentioned above and much more and they can be used by adults too. The ATOMS were launched in 2013 and since then, they have helped both adults and children in creating amazing things with Play-Doh, crayons, K-NEX and mostly wioth LEGO. The greatest aspect about the ATOMS is that they are extremely simple to use. That’s why they can also be used by kids, since there is no need for programming or electronics skills.

So, if you’re interested in playing with these amazing small plastic boxes that can do miracles, check out their fundraiser here.

In the meantime, you can get a breadboard and some electronic parts so that you can start building cool things right away.