There are more than two million people in the United States alone with epilepsy, thirty percent (30%) of which do not have their seizures controlled in spite of anti-epileptic medications. An equal percentage suffer debilitating side effects from these drugs such as nausea and other stomach or gastrointestinal problems, impaired cognitive function, fatigue, and lack of coordination. Many in this group can find relief from surgery, but for the over five hundred thousand that cannot, but there is a new alternative.

A recent breakthrough in the treatment of epilepsy is currently in clinical trials in the United States. The RNS® System developed by NeuroPace, Inc. was granted pre-market approval for testing by the Food and Drug Administration (FDA) in November 2013. The small, battery-operated device, or Neurostimulator is either implanted into the cranium, the surface of the brain, or directly into the brain, respective of the form of epilepsy. One or two leads are placed near the location of the seizure activity, or focus, and connected to the Neurostimulator by wires. The function of the The RNS® System is to monitor for unusual electrical activity indicative of an oncoming seizure and deliver low levels of electrical stimulation to normalize the brain’s activity. It is not designed to be used exclusively, but rather to compliment drug therapies that may no longer be stopping the seizures. Initial trials of the RNS® System have demonstrated effectiveness in adults that have had three or more disabling seizures per month over a period of three months. This is a promising alternative for patients that are not suitable candidates for lobectomy, cortical resection, and other epileptogenic tissue removal surgeries. 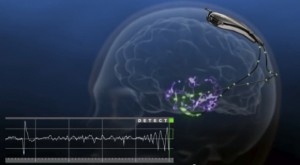 The RNS® System consists of a surgically implanted Neurostimulator. A doctor will program the settings of it, which will need follow up adjustments regularly. This is done on a computer called the NueroPace® Programmer. Information about brain activity is stored in the Neurostimulator (the implanted device). A software program installed onto a laptop computer is called the Remote Monitor. Data is collected from the implant site using a Radio Frequency Wand, and sent over a telephone line to a secure database. This database is called the Patient Data Management System, or PDMS, and is only accessible by the patient’s doctor. The results of the data are used to adjust the Nuerostimulator settings on subsequent followups.

The NeuroPace RNS® System may have applications for many other disabling medical disorders that greatly reduce the quality of life for countless people across the globe.  With the clinical trials for epilepsy going very well so far, one could conclude that we truly live in a remarkable world full of incredible emerging technologies every day.