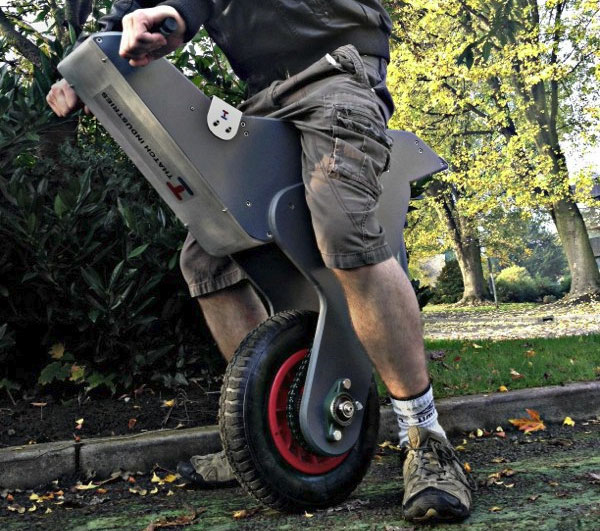 Inventor Nick Thatcher was once in a dilemma on what to build: a Segway or a self balancing unicycle ? He later decided to do both but the unicycle came later.

He named the unicycle “Raptor”  because it looks like the head of a dinosaur on the side-view and it’s made from common materials found around: a chain driven wheelbarrow wheel powered by a 350W geared motor with 9:1 reduction gearbox, a pair of 12V 7.2Ah batteries wired in series, some PVC and polycarbonate, an IMU gyro and an Arduino UNO.

Thatcher says the scooter can push up to 10 mph safely, but faster speeds tend to outpace the gyro’s corrective efforts.
The device can go as long as 90-120 minutes of care free fun as long as the rider maintains the balance. Unfortunately the unicycle is not ready for sale yet, but the motor looks promising with some minor adjustments. Maybe someday we can see the Raptor around the neighborhood.